The Pipe Club of Japan (the national Federation)

PCJ (The Pipe Club of Japan – the national federation) was established with 15 clubs in 1974 after participating as a guest team in the championship held in St. Claude in 1973 under CIPCE.
CIPCE changed its name to CIPC by participation of Japan.

The 3rd World Championship was held in Tokyo in 1976 and PCJ officially joined the CIPC at the general meeting held in Tokyo. England, France, Germany, and Canada participated.
PCJ sent the national representative (B. T. Suzuki) first time to a CIPC’s general meeting in Montreaux (Switzerland) in 1977 after Tokyo.
B. T. Suzuki was elected to the vice president of CIPC in 1982.

World Championship was again held in Tokyo in 1990 with participation from Denmark, France, Spain, Germany, and Taiwan.
PCJ held the 40th All Japan Pipesmoking Championship in 2013 in Tokyo and guest smokers participated from Sweden, Russia, Ukraine, Hong Kong, China, and Malaysia.

Today, there are 30 clubs in Japan including 7 clubs in Tokyo. Japan is scheduled to hold World Championship in 2018. 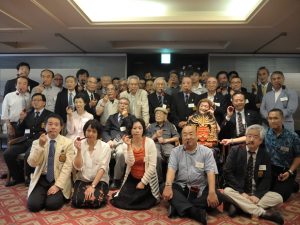 The JPSC is celebrating its 50th anniversary this year.

You can read all about it HERE!