Address of José FERREIRA in Portugal:

I was born in 1949, in Lisbon, Portugal. I started smoking pipe when I was sixteen and became a pipe lover since then. I am a member of Cachimbo Clube de Portugal, the national pipe club, and have been a member of the board twice and president from 2006 to 2010. 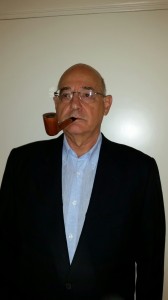 Professionally, I was Inspector Chief in the Criminal Police of Portugal. Now I am retired as civil servant but I own a business in the area of trade information.

Cachimbo Clube de Portugal (CCP) is a national club founded on the 31st January 1984 by a group of pipe smokers settled in Algarve and Lisbon that soon spread throughout the country. Its objectives are to promote the pleasure and the art of pipe smoking and to contribute for its  propagation, as well as collecting articles and objects related to it. Currently the Portuguese club has about 250 members, with headquarters in Lisbon.

Today, it promotes editions of pipes and accessories for their own members, organizes an annual national competition for pipe smokers, in addition to promoting local contests such us “Spring Contest” or “Fall Contest”, organizes monthly dinners and celebrates Pipe Smoking Day on the 20th  February. CCP participates in international activities with similar clubs, namely the Iberian Cup, bi-annual event which is held alternately in Portugal and Spain.

A monthly newsletter is released by electronic email, the “INFORMA”, which can also be found in the club website http://www.cachimboclube.pt.

EUROPEAN CHAMPIOSHIP 2020 was postponed until 2021