Thursday  April 30th we arrived at the Pheasant Run Resort in the afternoon. It was good to be here again and, contrary to last year, the weather was very nice. After checking in we made a tour of the premises and visited the big smoking tent where we saw some friends and had a beer. We also had a look at the exhibition hall where the show is held. It was as big as we remembered and still very quiet.

Friday morning after breakfast we met Craig Cobine, director of the Chicago Pipe Show and he gave us the key to the glass showcase so that we could start filling it with exhibits. (clay pipes, moulds and the special clay pipes we had made for the birthday of our King Willem Alexander.) In the afternoon I attended the annual meeting of UPCA where I was glad to see my American friends again. After that I had my presentation about the history of Dutch clay pipes in the exhibition hall. Some 60 people attended the presentation and a lot of questions were asked. On Friday night we were honorary guests at Craig and Linda Cobine’s table at the buffet dinner.

In my opening speech I stressed the importance of joining forces to safeguard the future of pipe smoking in an environment where legislation regarding smoking and tobacco is making this increasingly difficult. I gave all people present, about 600 , the warm greetings of the participants of the World Championship in Cologne and also invited them to Italy for the World championship for teams in October 2015. When I mentioned that I would continue to fight for the individual freedom of people to smoke a pipe everybody cheered and applauded. After the dinner my wife Reyncke attended a craft workshop organized by Linda for the ladies.

Saturday we went to the exhibition hall to set up our table. One of the 300 (!) tables in the hall. All filled with pipes and tobacco: Quite a sight. We were impressed again even after having seen it last year. I was kept very busy with all kinds of people wanting to know about the clay pipes I had on my table and also about the ideas of the CIPC. Like last year my table was in the middle at the beginning of the hall, next to UPCA, Mike Garr and David Bull and Vernon Vig. In the evening we attended the annual cigar dinner with “the Doctors of Pipes” and paid another visit to the smoking tent. After that it was time for bed!

Sunday  I was very busy in the exhibition hall again and this time we also visited the other exhibitors. What a variety of creative pipe

makers and traders, impressive!  Near the end of the show I was very surprised to be called forward by Mr. Cobine. He presented me with an award for my contribution to the show.

In the afternoon was the smoking contest in the tent. The event was very successful and sold out for the first time. Unfortunately I could not participate due to personal circumstances. There was a very surprising winner from Russia, a young Belgium pipe smoker came second and third place was for Mike Garr who was the best American smoker.

All in all CPCC 2015 in Saint Charles / Chicago was an unforgettable event for us. 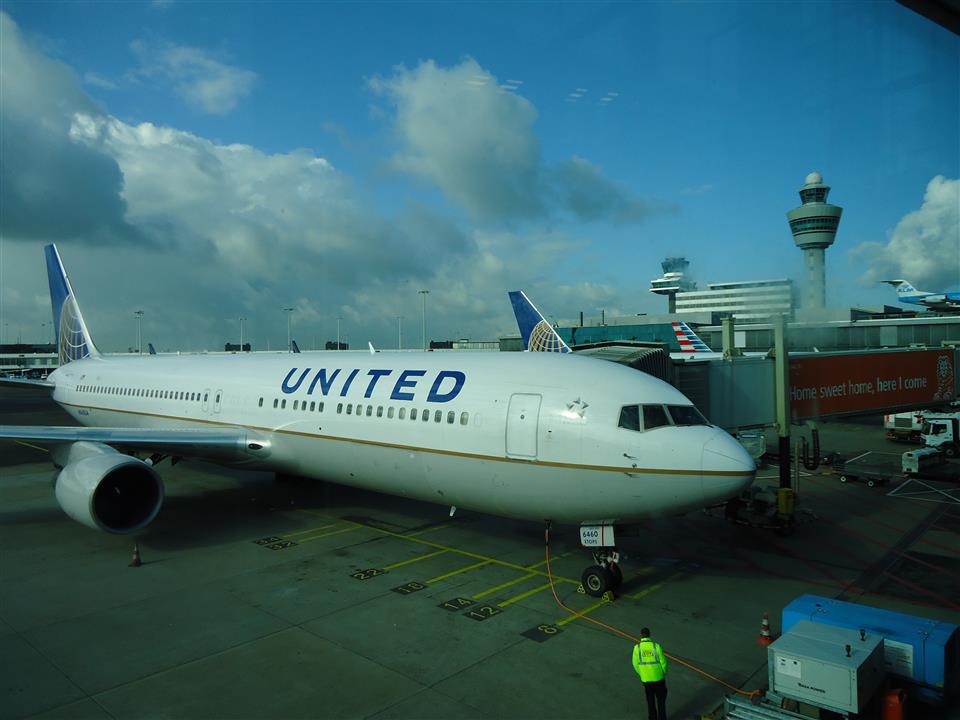 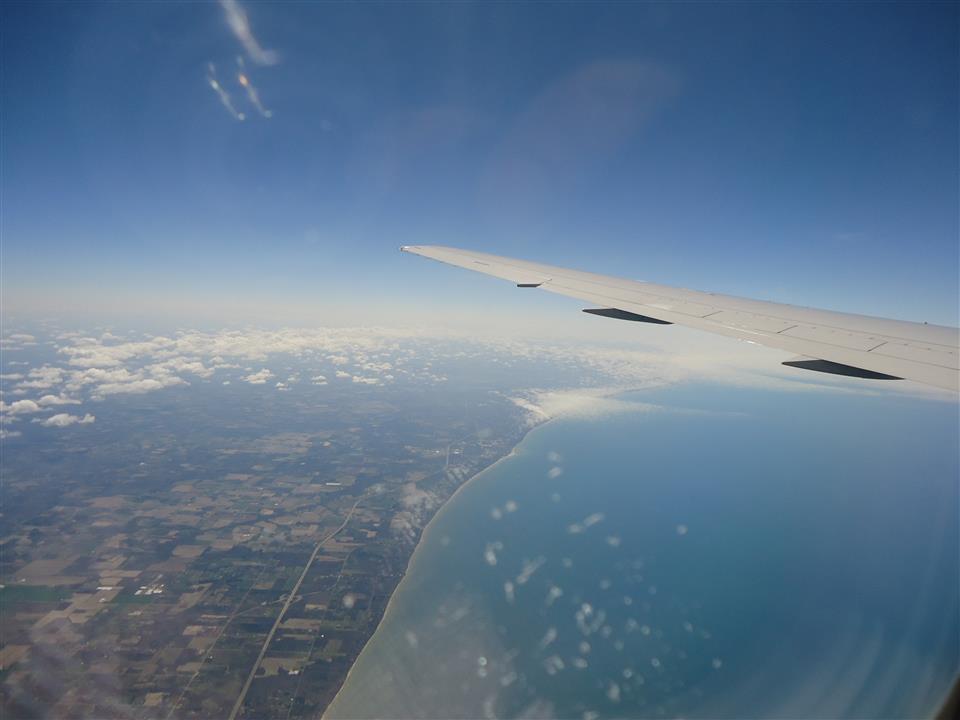 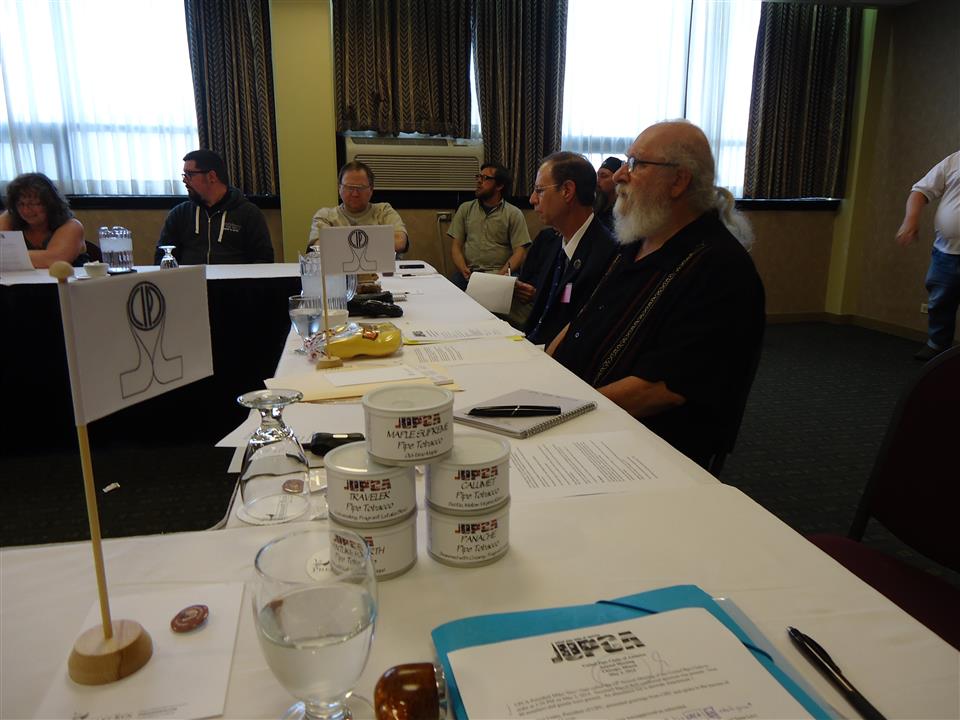 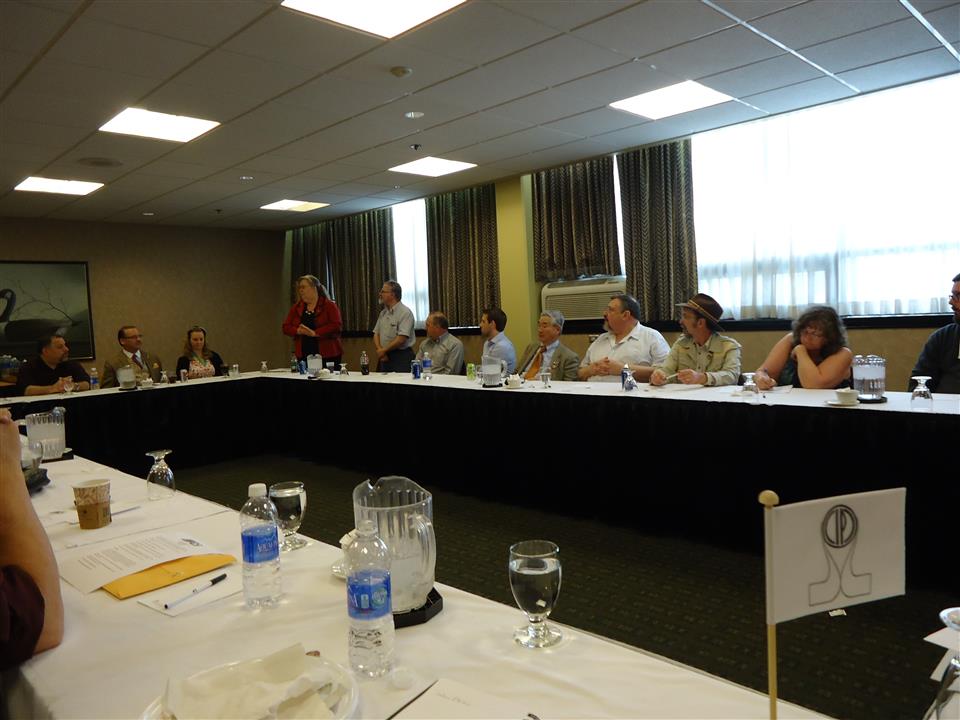 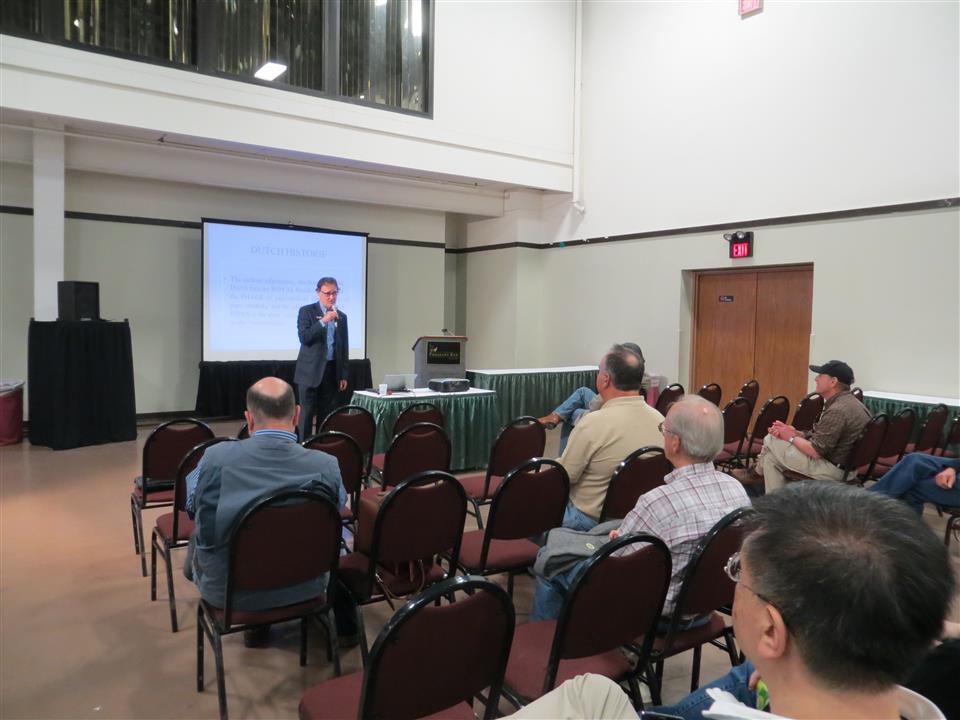 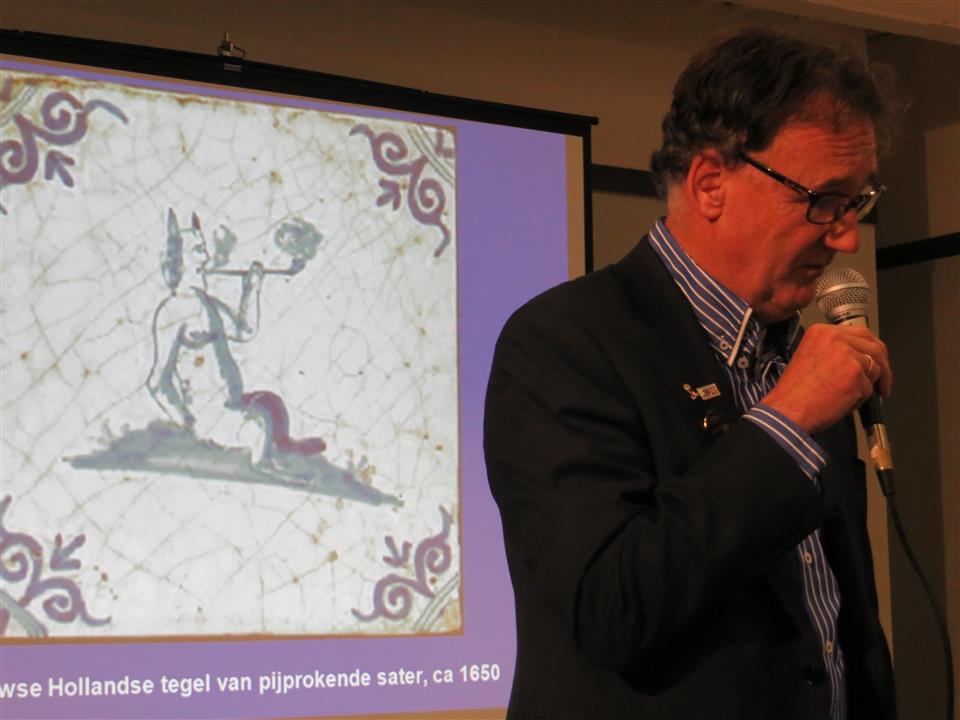 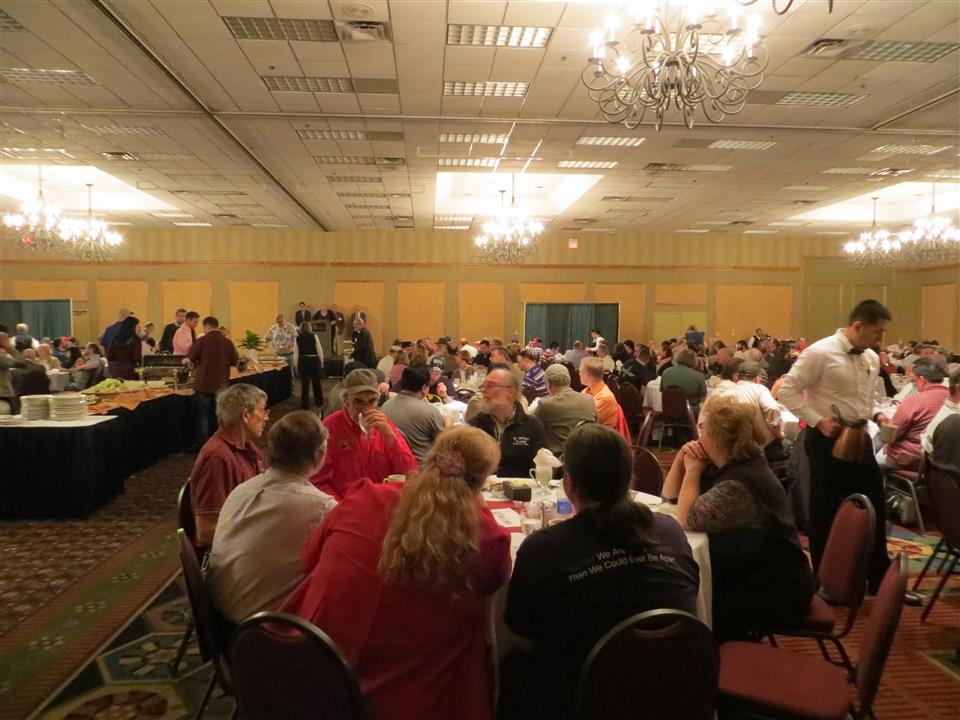 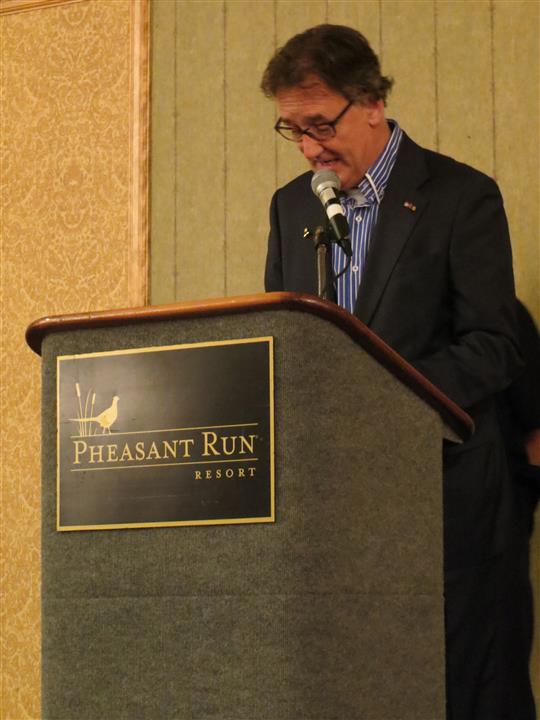 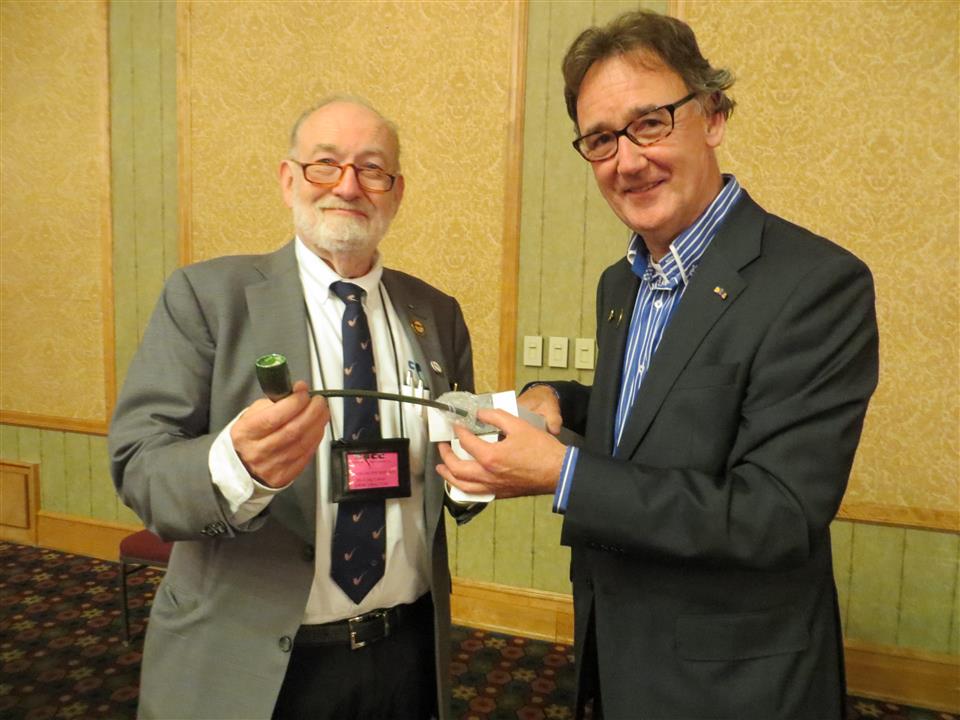 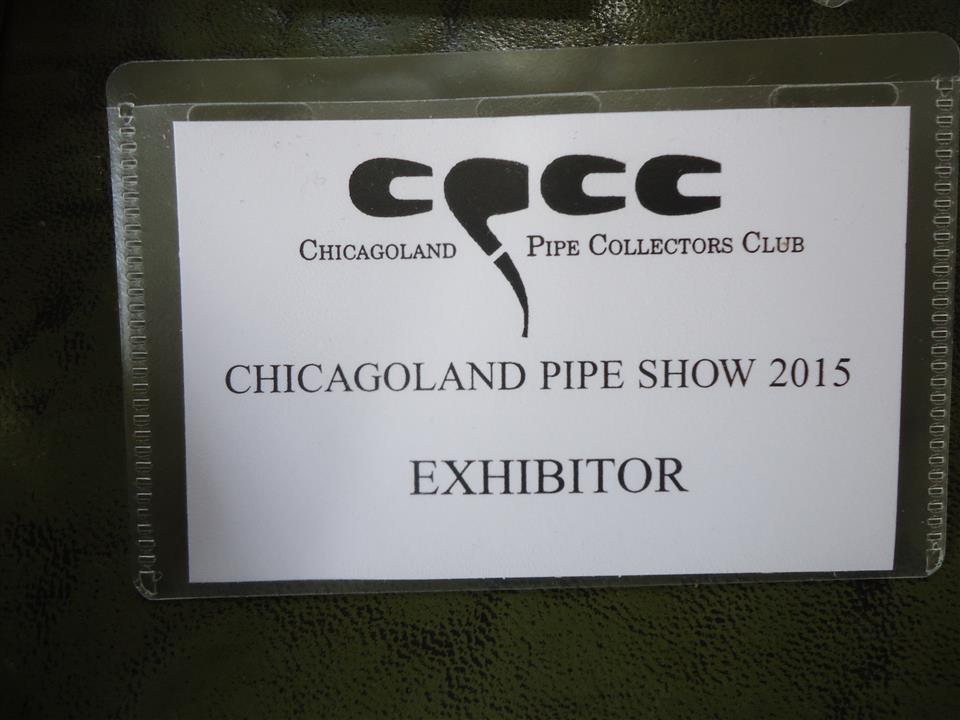 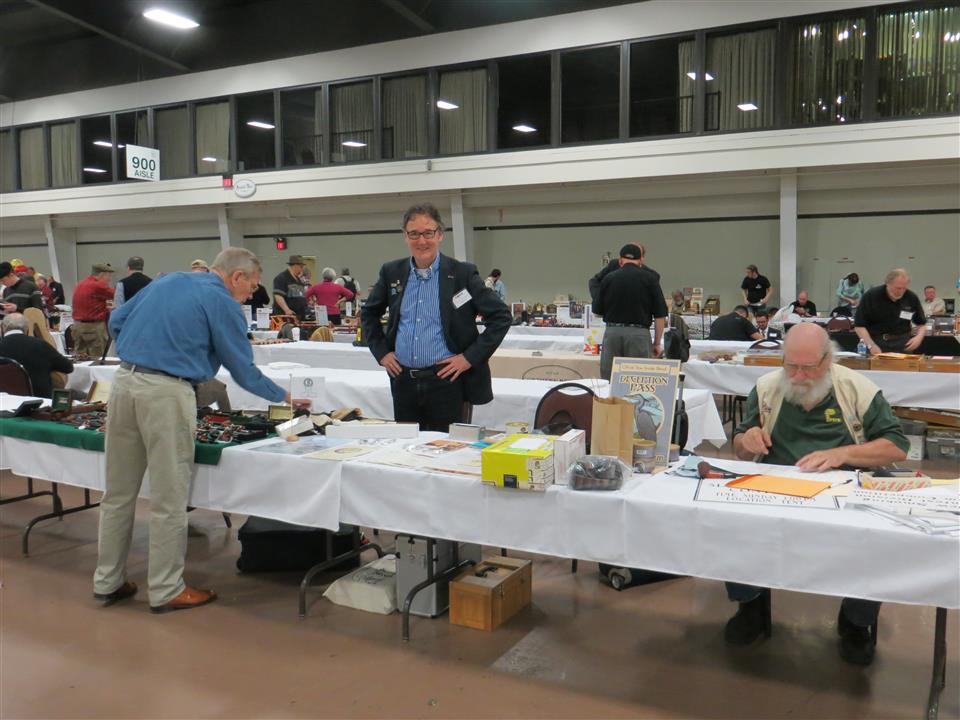 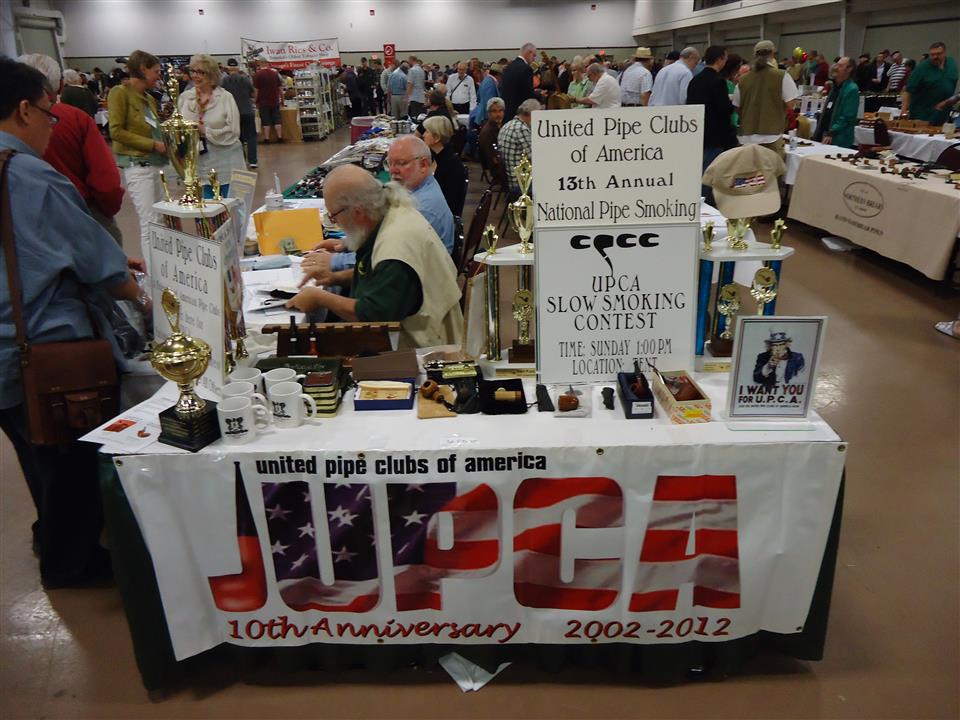 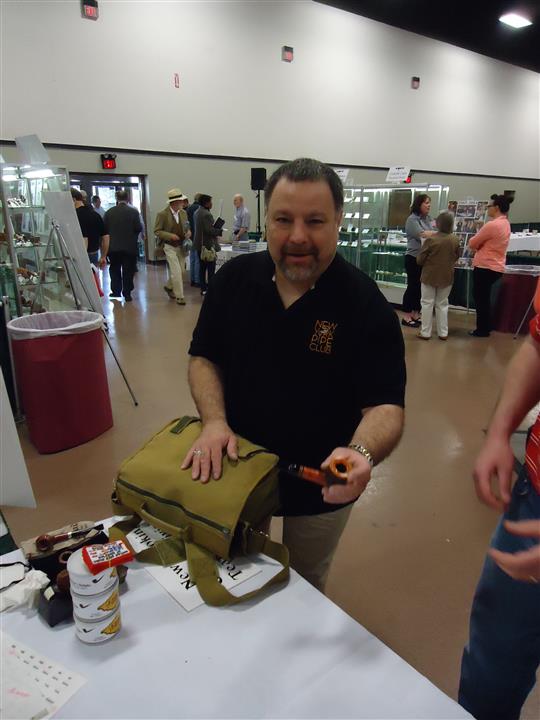 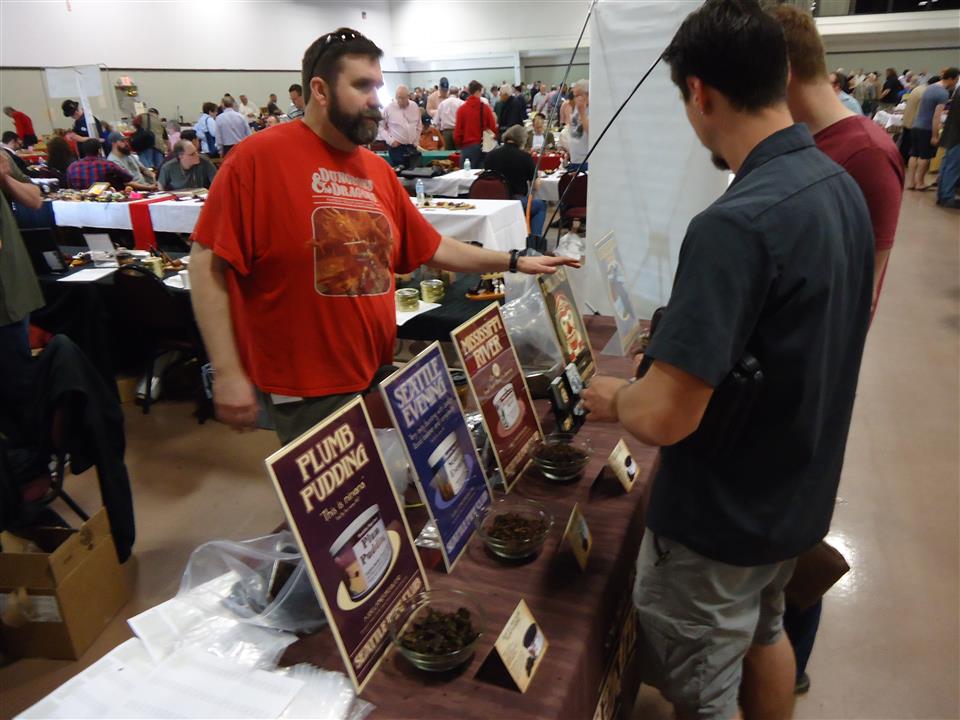 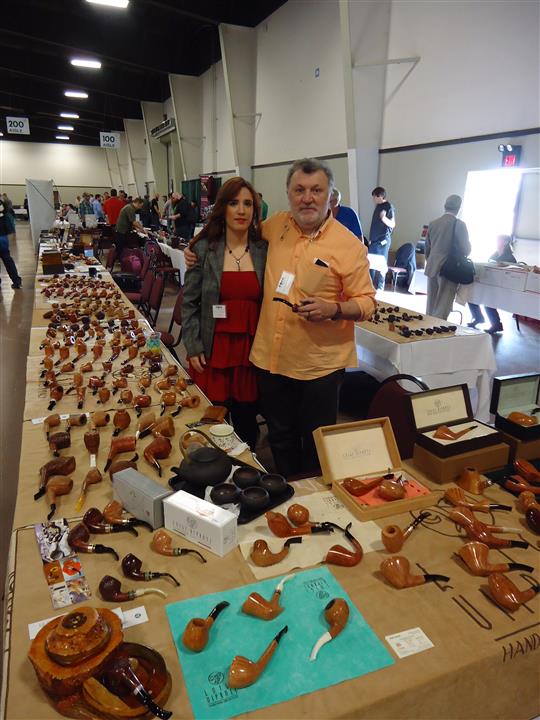 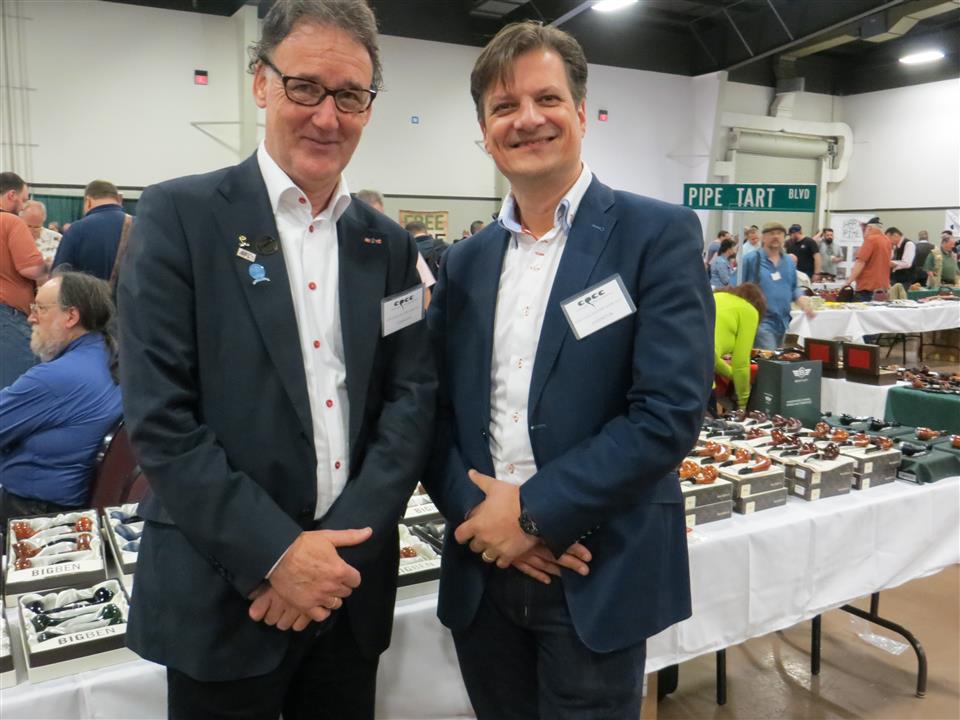 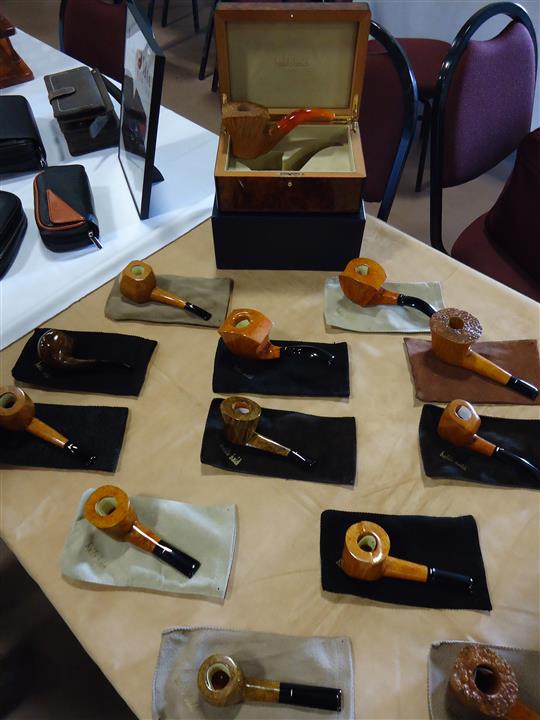 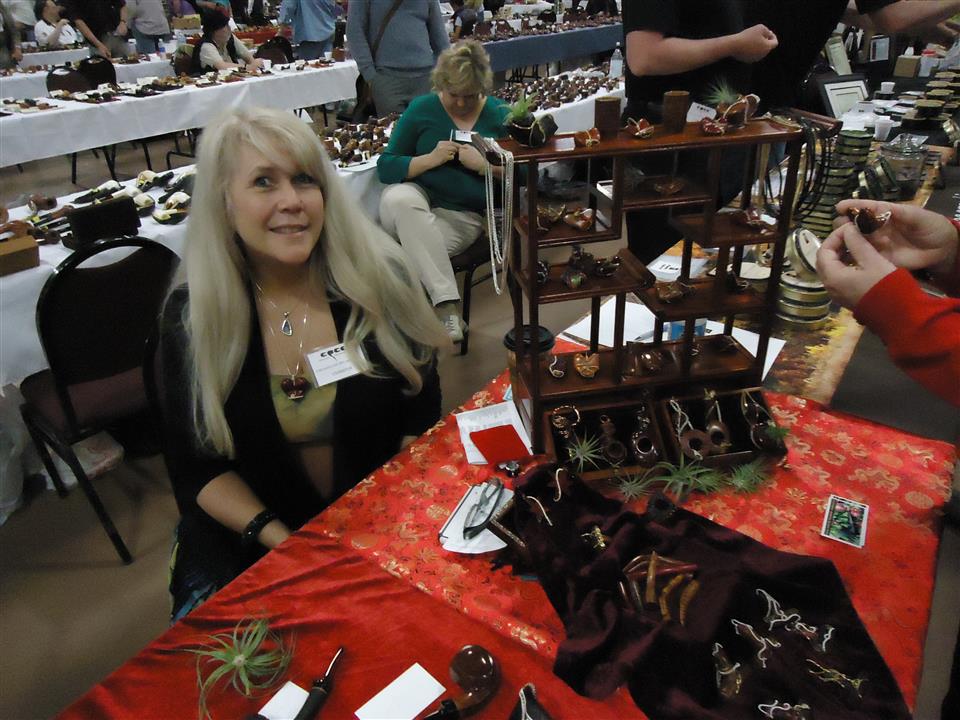 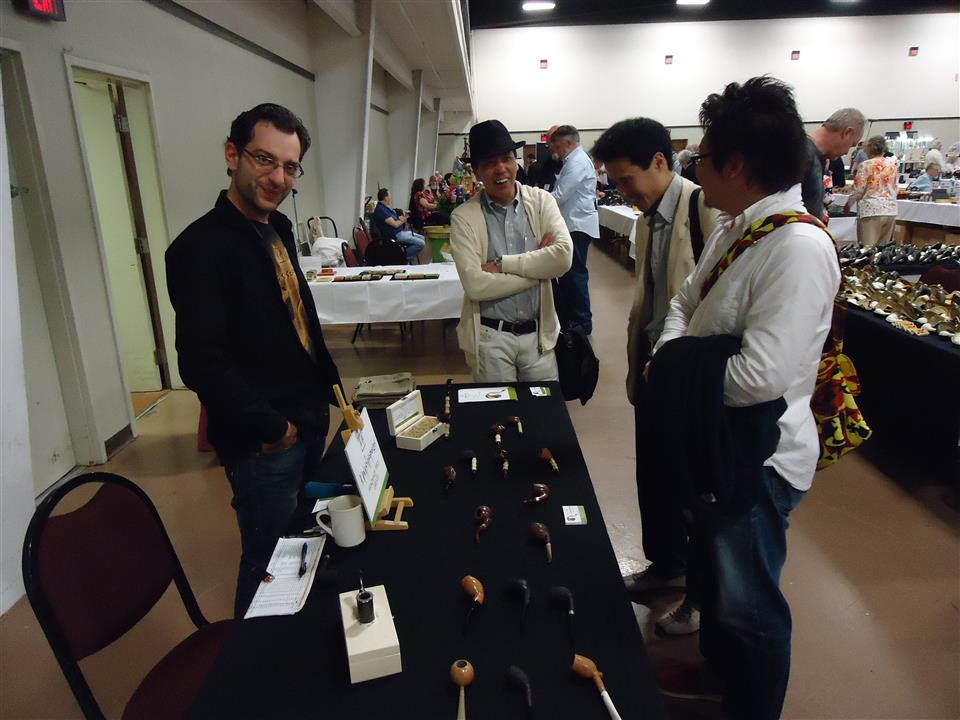 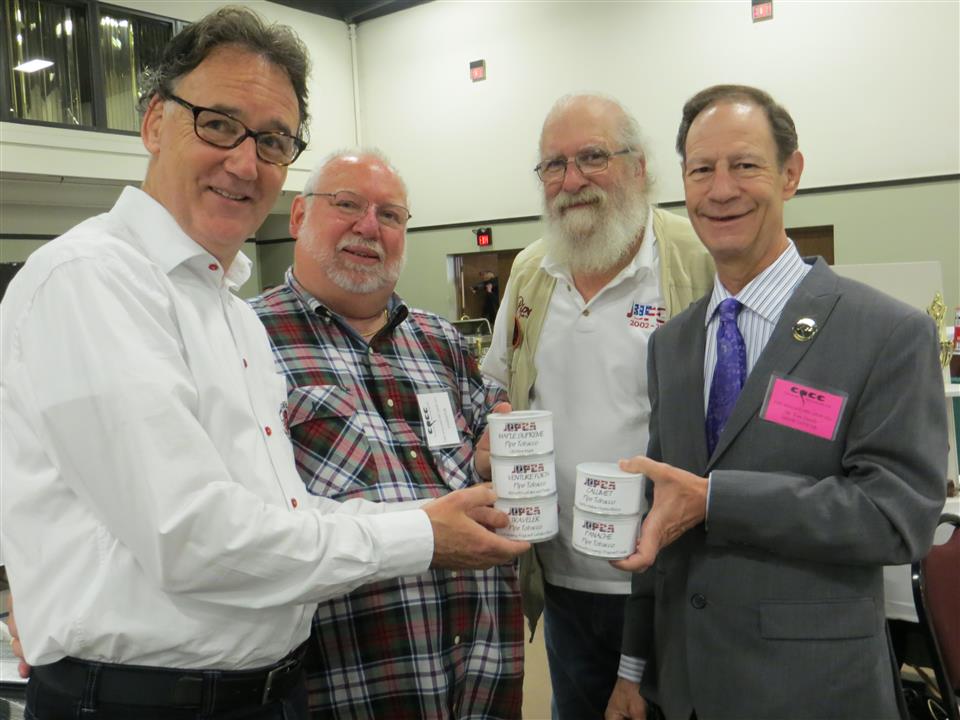 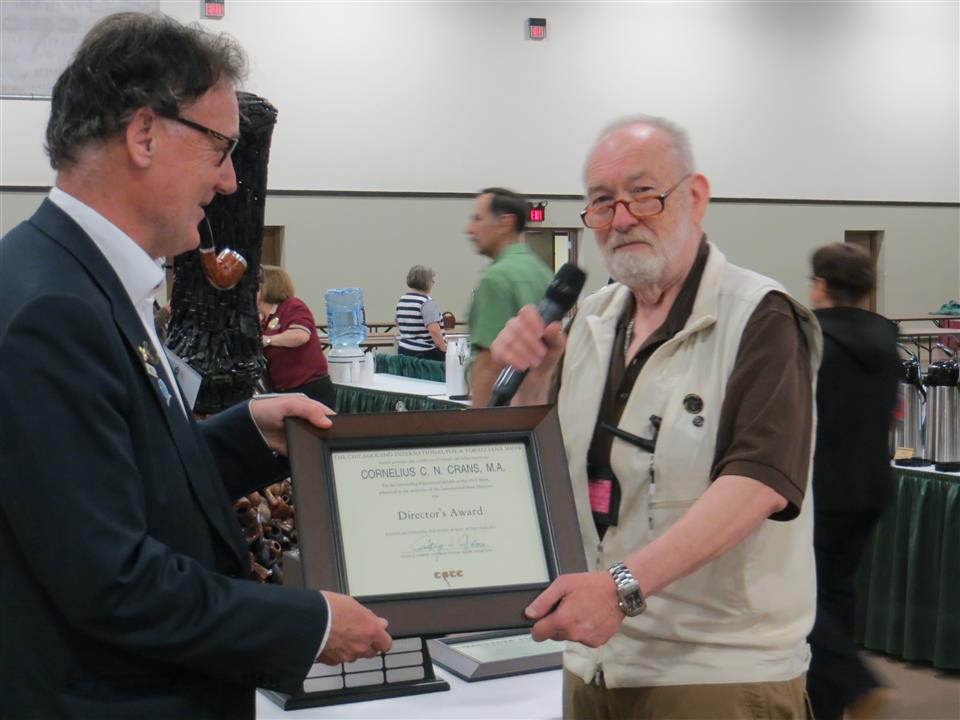 Results of the US national competition

Congratulations! On 3 May, 2015 the 13th US national slow smoke competition was held at the Chicagoland International Pipe and Tobacciana Show.
A record 102 contestants completed in the contest. The pipe was made by Viprati. The tobacco, Deception Pass, was donated by the Seattle Pipe Club. The overall winner was Lev Vasilyev (Russia) with a time of 1 hour, 32 minutes and 0 seconds. The US champion was Mike 'Doc' Garr with a time of 1 hour, 15 minutes and 2 seconds. Manduela (Denmark) was the winner in the Women's division with a time of 59 minutes and 34 seconds.
(For a complete list of times click here. For pictures (Darius Peckus photographer) of the contest click here.)
[Show slideshow]

Good evening ladies and gentlemen and ENJOY your meal (in my country the Netherlands “eet smakelijk”) thanks for inviting me to this Welcome Dinner at the Chicago International Pipe & Tobacco Show 2015 here tonight and “no worries” just like last year just a short talk.

Ladies and gentlemen, dear friends pipe smokers, traders and tobacconists, it is a great honor to speak to you as president of the World Federation of Pipe Smokers (CIPC) and bring to all of you hearty greetings from your more then 400 pipe smoking friends around the world who were assembled last October 2014 in Cologne / Germany.

It is not only a special evening but it is special show this whole weekend. Yes, celebrating time is here because the CPCC has its 20th birthday this weekend. CONGRATULATIONS, mr. Cobine and his team, people like Frank Burla one of the founders of this great event, all together a big compliment and from the audience –please- a three times “hoera”!!!

Come all together with clear statement(s): stand up for your individual
freedom of choice as a human being to smoke a pipe.

A special invitation from the CIPC Board to you all. Next year 2016 February 20th is IPSD. We want to celebrate that event around the world so the CIPC invites you all to send us the most original picture of yourself as a pipe smoker or a group of pipe smokers in your own (special, unique) environment. The best picture gets a prize / CIPC award.
This is an example what we are looking for – doing the job together – so I
hope to speak with you in the coming days and get your in-put. I’m at the
entrance of the exhibition hall of the Mega Center, where you can pick up
all the information about the World Championship Slow Pipe smoking
2015 in Italy. Hope to meet you there!

For now I wish you all wonderful days, excellent trade and lots of success
(within or out the Championship on Sunday) but remember one thing, the
central issue of pipe smoking is: ENJOY and relax with your pipe!

The Chicagoland International Pipe and Tobacianna Show is the premier pipe show in the world, at least in terms of its size. Since 1996 with the hard work of Craig Cobine and other members of the Chicagoland Pipe Collectors Club (CPCC), the Chicago pipe shown has grown to an event that features:

This year the Chicago pipe show runs from 30 April through 3 May, 2014. The show is held at the Pheasant Run Resort in St. Charles, Illinois, about 20 miles west of Chicago. For more information about the Chicagoland International Pipe and Tobacianna Show go to their website at

More info in the coming weeks on this website and at: pipes magazine.com and tobacco days.com